Bluewater iNet Group has experienced steady, manageable growth since its inception in 1996. Building our customer base on the recommendations of satisfied clients has been the secret of our success. Our Bluewater Log is a synopsis of the direction this adventure has taken us. It has definitely been, and continues to be, a great ride. 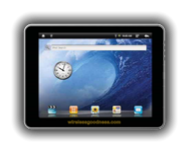 If there really is a recession, someone needs to tell our clients! The past eight months has been hands-down the busiest period in the fifteen-year history of our business, and there is no indication that will change for months to come. Social Networking (aka Facebook, primarily) has opened up an entire new era of online opportunities for businesses. A correctly integrated Facebook Page can add tremendous value to your company website, and opportunities you may have never considered possible. Add iPhone and Android Apps, and mobile websites, and the possibilities become staggering. We do it all, so give us a call...and ask for Rick.

Our recently completed BayPointBillfish.com website project was recognized at the 2010 American Advertising Federation's Addy Awards Gala at Edgewater Beach Resort in Panama City Beach. It was the first time our company has submitted a website for consideration in the annual Addy Awards Competition, and we are very proud the project was awarded a Silver Addy!

AUG
01
The unique opportunities continued into 2009, taking us into new "uncharted waters". Dance Life Fitness in Panama City, Florida contacted us to develop a new website for their newly opened business, the first time we have developed a website for this particular business sector. After delivering an excellent project to a very satisfied client in August, we contracted to develop a similar project for another Dance business in Gulfport, Mississippi.

MAR
23
A new year often brings new opportunities, and 2009 was no exception. We started out the year developing Gran Reserva Coffees, a website that provides a fully automated online system for creating your own designer coffee brand, complete with custom packaging and origin/blend/roast options.

JUL
30
As a result of our successful relationship with the Florida Department of Transportation, Bluewater iNet Group was invited by The PBSJ Corporation to develop a project as PBSJ's partner for the Federal Emergency Management Agency (FEMA) and the U.S. Army Corps of Engineers. That relationship continued to grow into 2009 and has resulted in a number of subsequent projects for those federal government agencies.

JAN
31
The Original Florida Tourism Task Force and the North Central Florida Regional Planning Council signed with Bluewater iNet Group to develop a tourism development website project for their service area, which includes the seventeen county area from Tallahassee to Gainesville. As a result of that successful venture, we received another contract that same year to develop an Economic Development website project for the same service area.

AUG
01
Through our successful working relationship with Opportunity Florida, Bluewater iNet Group was awarded the contract to develop a website for the Gulf Coast Parkway Project, an information portal for the Florida Department of Transportation, our first project for this client. When the FDOT's West Bay Parkway Project was launched, we were awarded the contract to develop that information portal as well.

OCT
31
We have had the good fortune of being the website development company serving the Port St. Joe Marina since its inception. Coastal Marina Management, Inc began overseeing the marina's operations in 2006, and Bluewater iNet Group was invited to become a part of their highly successful team. Within the year we were awarded the task of re-developing CMM's corporate website, and have since completed a number of website projects for CMM in Panama City and Niceville, Florida and in Surfside Beach, Texas.

JUN
21
In 2005 we were approached by and awarded our first contract from VisitFlorida (the official tourism marketing corporation for the State of Florida) to develop a tourism-focused website for the Gadsden County, Florida area. As a result of that successful project, we began serving the website development needs of the Gadsden County Chamber of Commerce that same year.

APR
05
Welcome to Orlando! Having seen the work we did for a very successful vacation rental management company on St. George Island, a similar business in Orlando contacted us (our first for that market), and another successful project was launched. In this business when you do things right, people notice.

OCT
01
We now have more elbow room! In September, we moved into our new office space located at 201 Long Avenue in Port St. Joe, FL. The new space is needed as we continue to expand our customer base, take on new members of the "crew", and expand the array of services we offer our clients.

JUL
31
Bluewater iNet Group expands into the Tallahassee market by developing a new website for Ausley & McMullen, P.A., one of Florida's oldest and most respected law firms.

OpportunityFlorida.com wins the Florida Economic Development Council's Website of the Year Award - Small Division, presented June 28, 2004 at the FEDC Annual Conference in Orlando, Florida. The promotional awards submissions are evaluated based on five criteria, which include creativity, impact, quality, originality and substance. (Bluewater iNet Group LLC is the website developer for OpportunityFlorida.com)

SEP
01
Andrew Davis was promoted to Vice President and Lead Developer as Hometown Internet become Bluewater iNet Group, LLC on September 1, 2003. "Andrew has become a vital part of our organization," commented Rick Lamberson, CEO. "Our new marketing theme and company name will help convey our new corporate identity, and Andrew will be a tremendous asset as we grow over the next several years." Davis has been with the company since Feburary 1999 as a web applications developer.

"Selecting a contractor from amongst the candidates was not an easy task. We had to consider all the various factors, such as selecting the right "look", the numerous options and capacities, future vision, and of course, price. Based on these variables, Opportunity Florida has selected Hometown Internet Publishing." (now Bluewater iNet Group, LLC)
For more of the Bluewater iNet Group story prior to 2003, visit the About Us section of this website.